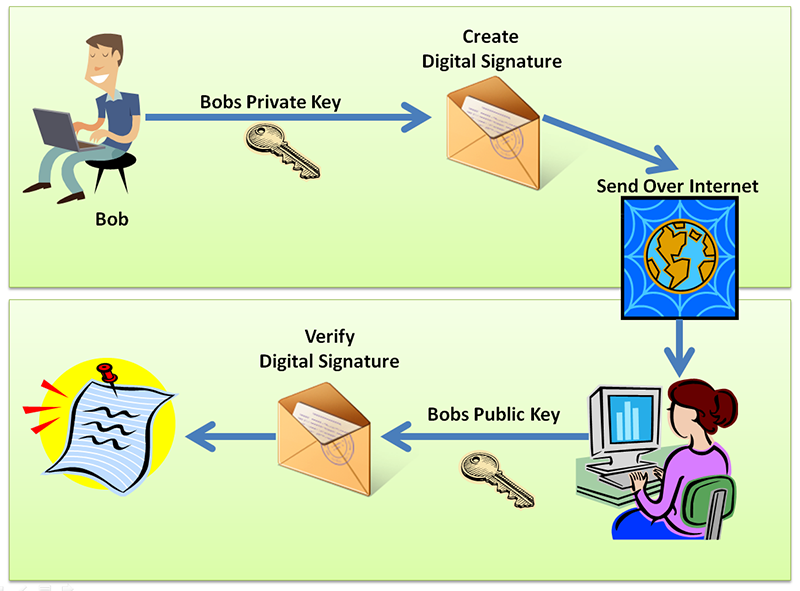 A digital signature—a type of electronic signature—is a mathematical algorithm routinely used to validate the authenticity and integrity of a message (e.g., an email, a credit card transaction, or a digital document).
Digital signatures are the most secure form of electronic signatures and the most trustworthy, making them ideal for sensitive legal documents and contracts. The certification and authenticity information stored within a digital signature is very difficult to manipulate or forge.
A digital signature is basically a way to ensure that an electronic document is authentic. By authentic we mean to say that the receiver knows who has created this document and it has not been altered in any way since that person created it.
It is an authentication mechanism that enables the creator of the message to attach a code that acts as a signature. The Digital Signature Algorithm (DSA), developed by the National Institute of Standards and Technology, is one of many examples of a signing algorithm.

The three core security services provided by digital signatures are: There are certain types of encryptions which are used to ensure the authentication. The authentication is done via a password, a Checksum, a Cyclic Redundancy Check (CRC) which is similar to Checksum but little advanced, Private key encryption, which means that the computer has a secret key (code) that it can use to encrypt a packet of information before it is sent over the network to the other computer, a Public key encryption, which is given by a sender’s computer to any computer that wants to communicate securely with it. The key is based on a hash value. In simple language, the digital signature is an authentication of an electronic record by tying it uniquely to a key only a sender knows. This implies that the sender must not be able to deny sending a message that he sent (This is called Nonrepudiation) Thus, digital signatures can be used to:

How Does it Work?

Digital signatures rely on a secret, either a secret passphrase, or, more commonly, a secret file. Anyone (without needing to know the secret) can check that two documents were signed by the same secret, and thus presumably by the same person, and that neither document has been changed since it was signed.  A digital signature is a seemingly random pattern of characters, which typically looks something like this: — this is a signed document —   James A. Donald
6YeGpsZR+nOTh/cGwvITnSR3TdzclVpR0+pr3YYQdkG WZpbVqsJAyyv5lIJFe1xAnTgNcPuYuhMEASCN82V 42n66jGGAXQ6R2kNeMUedQsobPjpV9UNZzALxAC1q
Those seemingly random characters depend both on the secret, and on the document being signed. Thus any small change in the document after it was signed will cause the document to fail to match the signature. Thus if I add a full stop, the signed document looks like this. — this is a signed document. – James A. Donald
6YeGpsZR+nOTh/cGwvITnSR3TdzclVpR0+pr3YYQdkG CsMYRG969XQ7CJhkpHmPcigu8yG+YhFGW1+QrgtC 4f5YXFqLPhvouhqn1OHNTWpDNc4UsqRjw4xnGJMT8
The second and third lines depend on the document, and so look completely different, but the program can tell that the two documents have matching signature.

Digital Signature Certificates (DSC) are the digital equivalent of physical or paper certificates such as drivers’ licenses, passports or membership cards. Certificates serve as proof of identity of an individual for a certain purpose; for example, a driver’s license identifies someone who can legally drive in a particular country. Likewise, a digital certificate can be presented electronically to prove a person’s identity, to access information or services on the Internet or to sign certain documents digitally. A licensed Certifying Authority (CA) issues the digital signature. In India, a Certifying Authority (CA) means a person who has been granted a license to issue a digital signature certificate under Section 24 of the Indian IT-Act 2000.

There are basically 3 types of Digital Signature Certificates viz. Class-1, Class-2 & Class-3 having increased level of level of security from 1 to 3. The MCA21 program, which has been launched for easy and secure access to MCA services in a manner that best suits the businesses and citizens, the class 2 and class 3 digital certificates are needed. In Class 2, identity of a person is verified against a trusted, pre-verified database. In Class 3, which is the highest level, the person needs to present himself or herself in front of a Registration Authority (RA) and prove his/ her identity. DSC of Class 2 and Class 3 category issued by a licensed Certifying Authority (CA) needs to be obtained for efiling on the MCA Portal. Please note that there is a cost of getting digital signatures. Then, in India, the Digital Signatures are legally admissible in a Court of Law, as provided under the provisions of IT Act 2000.

No comments to show.